When you think about data engineering, people usually think about using Java or Python as the primary languages to work with. The two languages both have a large community backing and many tools for handling big data. While they are fine languages to work with, I want to throw Node.js into the mix as a serious contender to get the job done. Node.js is performant enough to do some heavy lifting and has great NPM packages that help you develop fast. I wanted to share my experience of building data-intensive systems using Node.js.

I've been working at Coupang for just over a year now. I had the privilege of building the first ETL system for Coupang's advertising platform. The ETL system began with a modest goal to clean and ingest advertising metadata and time series data on a daily basis. Since the original ETL jobs began every day in the morning, I named the ETL system, Morning Star, referring to planet Venus that appears in the east before sunrise. This is a bit of a misnomer now, given that the system is now running ETL jobs on a real-time basis. I still kept the name. Since its inception, Morning Star evolved into a much larger system that is handling 500 GB of data, 400 million events per day, and the data volume is still growing.

Let's examine the basic data flow of Morning Star. Morning Star's infrastructure lives on AWS. The data flow starts with several Lambda functions that trigger different jobs for Morning Star by making an HTTP request to the load balancer. The load balancer balances the load in a round robin fashion to EC2 instances. Based on the CPU usages, the EC2 instances dynamically scale up or down to efficiently handle the load. The EC2 instance that is given the request to handle a job, downloads the raw files from S3 Data Lake. The raw files in S3 originate from several other services. Morning Star cleans, enriches and anonymizes the raw data depending on which job it has to perform. The massaged data is then uploaded back to the data lake, where it is subsequently copied to Redshift. Redshift is where various other services and users can consume the data to their liking. 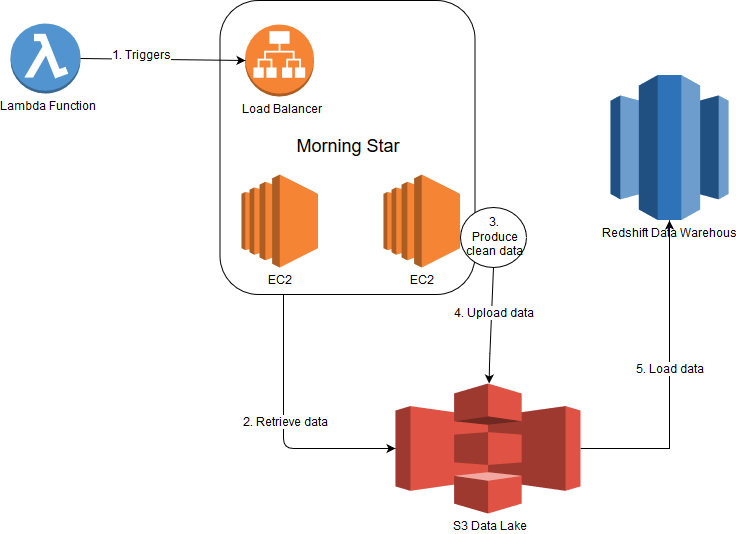 Node.js has been an excellent tool for building the desired system. Node.js finally has the async-await pattern to take advantage of parallelism without callbacks. Having worked with callbacks and chained promises, I think the async-await pattern solved major problems found in the previous asynchronous programming patterns. You can program your code spanning vertically rather than horizontally like the nested callbacks make you do. Your code is easier to read when it spans vertically. You can handle errors more precisely than the chained promises pattern where a single catch block is typically responsible for errors thrown anywhere during the execution of multiple chained promises. You can have a more nimble control flow of your code with async-await because you can use if-else statements easier. The ergonomics of coding was much improved with using async-await.

Speaking of great ergonomics, I should also point out the stream module in Node.js to be a fantastic tool to process large files. When you work on web services, you typically read and write discrete chunks of data transactionally. On the other hand, it is very common to use stream to move data from one place another in data engineering. You often deal with cases where you no longer can load the entire data onto the memory. Or you might deal with a source that is continuously generating data that needs to be moved to another place in real time. That's when you have to stream the data. Node's stream library helps you stream data reliably and manipulate the data with ease. The functions in the stream module are easy to understand and use. They are well documented with an ample amount of examples, so you can easily incorporate them into your code. The stream library plays nicely with the async-await pattern I use elsewhere as long as I wrap the stream code with a promise.

There are other standard modules in Node.js that makes it suitable to do data engineering. The child-process module is used to execute terminal commands, and it was useful in controlling jq, parallel and Hive Beeline client. The fs module had all the functions I needed to work with the file system, and zlib handle gzipping and gunzipping with stream perfectly. And if I didn't find an adequate module in the standard Node.js modules, I found almost all of them in the NPM repository. This assurance gave me the confidence to push development in Node.js, and help me iterate faster.

Node.js has some downsides when you try to use it to process data. I applauded Node.js' async-await to be an excellent pattern to use. However, this means that you have to write a promise wrapper for callbacks and pipe functions in order to incorporate it with the async-await pattern. It's not difficult, but it is tedious.

I also had trouble finding an up to date Hive client for Node.js. Hive is a widely used data warehousing tool for working with big data. I was surprised to learn that there's no well maintained Hive client available to use on NPM. For this reason, I had to use Hive's Beeline command line client and write Node wrapper around it. I had to install JDK, Hadoop, and Hive as dependencies for Beeline to run. There were a lot of unpleasant programming I had to do to make this work.